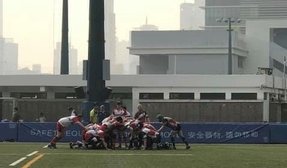 The Marauders set out to continue their winning ways against Typhoons on Saturday, 12 January 2019. An abnormally hot winter’s day and the typical pollution levels promised to test the ageing lungs of the Marauders. A good turnout meant that the Marauders fielded a strong looking side keen to make it 3 wins on the bounce.

Captain Doug Wolfson set the scene by winning the toss. The Typhoons had their work cut out. The match started with continual strong Mauraders forward play, which has become a trademark of recent successes. Simple carries and hard yards earned, before JJ Bull stabbed it forward. Knock-on, a few phases, penalty 30m out, 3-0.

We received the ball and off we went again, left, right, left, right, working our way 50m up field due to a dominant ball carrying pack. More good work by the pack and more glory for the backs as a halfback pick-and-go from 5 metres out ended in a 7 pointer next to the poles. 10-0.

The substitutions were coming thick and fast in a hot and muggy Saturday midday kick off as Coach JB kept the lads fresh. With the scrum totally dominant, anchored by a stellar all-round performance from Mike Coates and Matt Whitmell, and with Gav Herrmann and his lineouts functioning like clockwork, the Marauders smelt blood. A couple of penalties later and a yellow card for good measure. 20-0.

Then, the moment that pulled the the team together. Great show of support! Bradley Malherbe is safely back on his feet, even managing to get down to Macsorleys on Sunday to support Doug Wolfson in “One of the Top 10 Sundays of his Life”.

With Bradley not far from our thoughts, we kicked on for the second half. After quickly regaining possession and smashing it up with notable carries from Will Binnie, Doug Wolfson, Jack Carson et al., some good work out wide by the backs and some spirited kick chases. The Marauders were dominating collisions and winning quick ball. We crashed over for our third try as Rodney ‘Rodders’ Chen dived over after great build up. Kick a formality for Ross Eathorne. 27-0.

With the clock winding down the Marauders stepped their foot on the gas, good interlinking forward and backs play resulted in two more seven pointers with Pam Ayres scoring a long range counter attack, and Lawrence Rumble receiving a great offload from JJ Bull. Final score 41-0.

The most impressive element of the performance was the team’s patience and control of the ball as well as a willingness to be accountable for making their tackles.