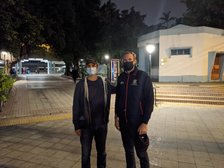 "Kindess Matters" - the driving philosophy behind the charity

On the evening of Monday 21st of December, when most families in Hong Kong are celebrating the winter solstice, twenty club members had the opportunity to witness a side of Hong Kong that is often overlooked or even actively ignored. By partnering with Impact HK, a charity that focuses on the plight of the homeless, we were able to help distribute 150 care packages containing essential items.
Having heard a lot about the good work that Impact HK does, it was still an eye-opening and confronting experience to meet individuals whose prospect of rejoining mainstream society seemed bleak at best.
Impact HK was founded by Jeff Rotmeyer, whose initial intention of doing one kind act per month has now mushroomed into a charity that operates 50 'kindness walks' per month across 6 different locations in Hong Kong. The charity's philosophy is as much centred around education and changing the public perception of the homeless as it is on financial or physical donations.
Many more members than the permitted twenty indicated their desire to get involved and I genuinely hope that we can foster an ongoing relationship. We were able to collect donations from teams and parents which were hugely appreciated by Jeff and his team but I believe both Impact HK and Sandy Bay both have the potential to benefit hugely by continued collaboration in the future.
Share via
FacebookTwitter
https://www.hkusandybayrfc.com
Recent news