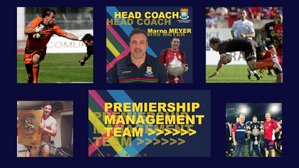 The Big Man with a Big Dream for Sandy Bay!

How do you feel being the Club Head Coach for Sandy Bay?

It’s a very big honour and pleasure to take on the role as the Club Head Coach for Sandy Bay. Especially for me, I’ve been part of Sandy Bay for the past 4 years as Assistant Coach, Head of Recruitment, Youth Pro-Coach and even as player for a short period. Since I joined Sandy Bay as Attacking Coach in 2018, I helped our Premiership team to win the Grand Championship while consistently being one of the top try scoring teams in Hong Kong. I am very excited for this opportunity to help take the team to the next level and win more trophies for the club.

Where were you and what were you doing before joining Sandy Bay?

I am originally from Bloemfontein, South Africa. Prior to joining Sandy bay, I playerd professional rugby in South Africa & France for over 12 years. I had the opportunity to work with some of the best coaches in the world. Such experience helped me grow as a player, a coach and as a person. I look forward to bringing in my own experience to help our players, teams and club to grow together.

What were you most proud of from the last few years working with Brett Wilkinson, Will Webster and Kevin West?

A big part of my job along with coaching, was being the Head of Recruitment for our premiership side. I’m extremely proud of the recruitment model I have put together and with the board’s backing, I’ve managed to put together an extremely strong squad of players over the past 3 years that puts us in a good position to challenge for higher honours this season. At the same time, together we helped so many young men and women to grow on and off the pitch through our academy and premiership program, that is something I am the most proud of.

Any special message to our members?

The club and players mean a lot to me and I am really looking forward to working with everyone to achieve something special together this season. I’m also very pleased and privileged to have a top class coaching team with me in Fai Mika (Forwards & Defence), Mark Komar (Analyst & Defence), Ian Wilson (Strength & Conditioning) and Jesper Wong (Head of Medical). I am sure we will have a very memorable time together with everyone in the club.

I am looking forward to seeing more parents, players and supporters by the pitch side at our Premiership games and cheer the team on for the remaining games of their campaign!