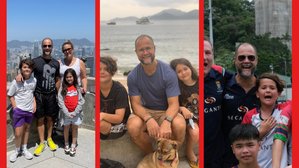 My goal as the Mini's Chair is to keep inspiring more kids(& adults) to be the best version of themselves on and off the rugby field.

Talk us through your background?

Being half Samoan, half Aussie and born in NZ, I have had the pleasure of travelling a lot when I was a kid. Most of my life has been playing & coaching sport.  Since the age of 3,  I played golf for 10 years and got pretty good enough to be no.1 in American Samoa(not a big place, I have to admit) but it gave me a taste of what it's like to compete.  Win or lose, just make sure you give it 100%.

Other sports were Wrestling(Olympic style) where I was no.1 in the country for a few years, represented my region in Rugby  Union, Rugby League & Softball as well as represented Hong Kong in Touch rugby for 2 years at the young age of 35....I just love trying any sport I can swing a bat at or chase a ball like squash, tennis and cricket. Anything - even running in a few Triathlons,  Action Asia's, King of the Hills and anything someone suggests I should try at least once.  Just a little bit competitive....

I have been a Personal Trainer for over 20 years and now own a boutique Personal Training Studio in Hong Kong that helps adults and kids realise their physical potential in sport and in life.  Like I said, I have been coaching most of my life

Over to rugby, what has been your playing and coaching journey?

After moving to NZ, I started playing rugby at the "ripe old age" of 10 after a couple of years "Soccer".  My 1st game was put on the wing and after 3 tries against my mates, I was in, so I dropped soccer and as many in NZ, I played rugby on Saturday and played rugby league on Sunday then Touch during the Summer.  Loved it.

I then moved to Australia at 16 and represented South Brisbane in Rugby as well as won the Queensland State Schools Touch Rugby Championship then played rugby league and the odd Rugby game with the infamous Red Backs(in our own little playground) at University until an eye operation closed my contact sports playing days down.

I began coaching at the age of 26 when I became a Personal Trainer in New Zealand and have never stopped. Since Benji was 5, I have been coaching rugby at Sandy Bay for the past 7 years and just recently been coaching my daughter in Rugby.   I love "trying" to inspire people to be the best version of themselves whether its sport or just in their own lives.  It can be tough but seeing people progress and for them to realise it is one of the true rewards of coaching.

My goal as the Mini's Chair is to keep inspiring more kids(& adults) to be the best version of themselves on and off the rugby field.

Sport and Rugby in particular, has taught me many values of life - how to succeed, how to handle yourself when you don't and learn from that. Play as an individual and as a team towards a common goal.  But most importantly to enjoy yourself because at the end of the day, it is only a game but such a fun game to play.

So if you see me, please do come say hi.  I would love to get to know you and your family.