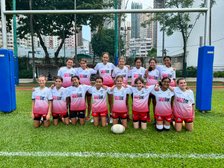 What a weekend for the U14G team. Friday, we arranged a Team Bonding Junk Trip. We have some new members to the club and some players moved up from U12, so we thought it would be good timing to arrange a social trip 2 days before the first tournament. What an amazing bunch of girls. Malcolm Keys and I didn’t have to put any of the girls in the naughty corner during the trip and all had a good time.

Sunday the team had their first tournament of the season. 2 groups with 3 teams in each group. There were a lot of uncertainties before this tournament; how strong are the other teams, how many left Hong Kong during the summer etc. During the day we most of the questions answered.

We had a rough start as we had not received the match schedule in advance and it turned out we all showed up 2.5 hours before our first match. I am sure many had better things to do than sitting around waiting but the players and parents handled it well.

First match was against HKFC. Result: 20-10 to HKU Sandy Bay
Jennica Narag made 3 tries and Zoe Schorr made 1.
The defense was really strong and this was a real team effort. The team was off to a good start.

Second match was against Barbarians and very close. Result 10-5 to HKU Sandy Bay
We came from 1 try down to win after tries by Jennica Narag and Zoe Schorr.

2 wins meant we won the group and made it to the final against the winner of the other group Valley Fort. Last year U14G lost the Division final against VF and I think many players had revenge on their mind.

What a match. Once again, a real team effort with strong defense and all helping to push the line forward. Jennica Narag made the first try, Tea McMahon the second and Zoe Schorr the third. Jemima Keys managed her first conversion after being given the task as kicker. In the last-minute VF managed to pull one back and the final result 17-7 to HKU Sandy Bay - Champions.

What a performance and the coaches only had praise towards the team. The whole team contributed to winning the tournament and hopefully it has given them a lot of confidence going into the league starting later this month.

Thanks to Michael Corcoran and James Fallon for taking notes during each match.