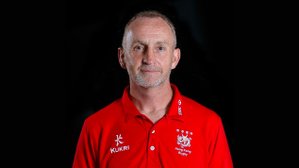 I have a long standing record that demonstrates my passion for the development of under age rugby and coaching programs and I am extremely excited to join Sandy Bay in this important role
Kevin West, Juniors Head Coach

We are very pleased to announce that Kevin West has joined HKU Sandy Bay RFC as our new Juniors’ Head Coach.

Kevin is a career coach with an outstanding depth and breadth of coaching experience as well as being a World Rugby Coach Educator. Sandy Bay is close to his heart, having coached girls age-groups, the HKCC Men's Premiership team (prior to becoming Sandy Bay) and still occasionally (and maybe regrettably) puts his boots on for the Raiders on Saturdays.

His CV speaks for itself – a full list of qualifications and experiences are listed below.

As Juniors Head Coach, Kevin will lead us into a new era of coaching capability and performance by developing, implementing and maintaining a rugby coaching program for HKU Sandy Bay RFC whilst supporting coaching and player development at all age groups U5 to U19.

Over the past few weeks Kevin has been busy meeting the head coaches and chairpersons of each section with the aim of understanding the current strengths, weaknesses and challenges of coaching within the minis and youth boys and girls’ programs.

The club aims to have all parent coaches trained and qualified to minimum standards and, as a coach educator, Kevin will be leading various coaching courses in the early part of the season. Stay tuned for more news on that soon.

Kevin will on the ground on most Sundays and weeknight training sessions. Please say hello and make him feel welcome.