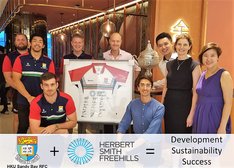 The Sandy Bay Premiership team celebrated an amazing season in the warm company of Herbert Smith Freehills who were celebrating their own close to another successful financial year.

The low-key function was held at SHÈ (derived from the Chinese character “舍” for a place of rest) inside Lane Crawford at IFC where members of both organisations mingled and swapped war stories.

HSF has been a stalwart sponsor of the club, firstly sponsoring the Senior Rugby Section when they still played as HKCC and then coming onboard at Sandy Bay to also sponsor the Youth section and the coaches of the entire Junior Section.

Recent seasons have been harsh on the Seniors trophy cabinet, but HSF's perseverance and support paid off in 2018/19 when the section took home three trophies – including the prestigious Premiership Grand Championship Trophy (pictured).

Event host, Alex Aitken, a partner at HSF and a parent coach of Sandy Bay U8’s, welcomed the Sandy Bay Premiership squad members to the event, noting that “the teams at Herbert Smith Freehills were all fully aware of and delighted with the rugby success this season and that there was a great sense of pride at the firm”.

Sandy Bay General Manager, Grant Beuzeval, replied that the club was “immensely grateful for the support and loyalty of HSF” and noting that “sponsors are the lifeblood of the club – helping to keep player subscription costs as low as possible while funding professional coaching at all levels from the mini players up to the seniors, subsidising top quality playing kit, recruiting new players at all ages, genders and levels and remaining competitive at the elite level”.

As a memento of the incredible Premiership season, the team presented an autographed playing shirt to HSF which was enthusiastically accepted by Aitken, saying that it would feature prominently in the Central offices of the firm.

HKU Sandy Bay RFC once again express heartfelt appreciation for the support that Herbert Smith Freehills as provided to the club and all its members and wishes the firm all the best for continued success and growth in its next financial year.