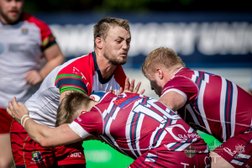 Agonising Defeat for the Prems Against HKFC

Despite a growing injury list and players such as Dana Fourie and Harry Laidler being asked to play well out of their usual positions, there was still an air of confidence among the Prems squad prior to the match against HKFC at So Kom Po. Both teams’ defences were tested and probed early in the game as two of the larger packs in Hong Kong went about trying to assert dominance. Although the Bay were again guilty of conceding too many penalties in their own half, they went unpunished initially as the Football Club’s kicker produced two ugly shanks off the tee. It was only a matter of time until they finally slotted an unmissable 3-pointer but luckily it seemed to spark Sandy Bay into action. Dismissing the opportunity to level the score through a penalty, Sandy Bay chose to kick for the corner to go for the try. The lineout was duly caught, and the subsequent drive was repelled right on HKFC’s try line. After recycling the ball from a series and short pops to our big men, the HKFC defence began to wilt which led to Luke van der Smit bustling through for the first try of the game. After a successful conversion and another penalty by Club the game was evenly poised at 7-6 to the Bay at half time.
The second half saw a try for Club propel them into the lead but not for long, as the Sandy Bay pack begin to dominate the scrum with the resulting pressure leading to a yellow card for their hooker. Pressure was beginning to build and after several sorties from the Bay’s ball carriers, scrum-half Brendon Nell spotted a gap and scurried over for the second try to retake the lead 14 – 11. The unrelenting Hong Kong sun was beginning to take it’s toll by then and although the defence remained resolute, silly errors began to creep into the game. The last few minutes were agonising as a score from either team could have sealed a win. In the end it was Club who managed to dot down three minutes before full time, the final score reflecting how close it had been throughout.
As disappointing as it was, Sandy Bay can reflect on an improved, battle-hardened performance from last week, but a few key areas need to be tweaked to be assured of a victory against HK Scottish this Friday night. It would be great to see as many as possible cheering on the prems and drowning out the bagpipes, kicking off at 6.30pm at King’s Park.
Share via
FacebookTwitter
https://www.hkusandybayrfc.com
Recent news