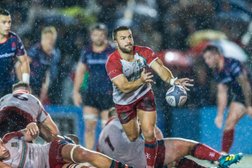 With a round remaining in the Saxo Markets Premiership Challenge Trophy, Herbert Smith Freehills HKU Sandy Bay are clinging on with a chance to finish in third place after a hard-fought 30-22 win at King's Park over Bloomberg HK Scottish.

A fine forwards try to French newcomer, Alexis Brochet, kicked things off before Web Vueti swooped in with a finely timed interception to gallop 60 metres before halftime. Jack Metters converted both and had a solid day with the boot.

In the second half, Scottish stayed close with kicks and a try of their own before 2018/19 season Player of the Year (for both HKRU and Sandy Bay), Luke van der Smit put on a "special" by beating several tacklers in an outstanding 80 metre run from his own 22 metre line. In what must be one of the most incredible individual tries ever scored in the Premiership, van der Smit was like a run away train with players scattered or trying to hang on for their dear lives. The big Namibian enjoyed his first outting of the season and so did his team mates.

Two late penalties to Metters capped a good day off the tee for the right winger and put Scottish out of range and out of bonus-point contention with the final score coming to a rest at 30-22.