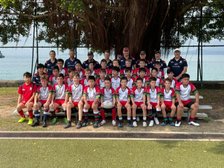 Bay boys get the better of Island rivals, HKFC and Valley Fort

The U13B continued their strong 2018 / 2019 season with three wins from their matches with Valley Fort and HKFC at Happy Valley today.

The A side rallied following a tricky opener against a well drilled Valley team to beat HKFC 21-5, Direct running, powerful forward drives and good play out wide combined to put the three scores on the board, Andrew Rowe converting all three impressively.

The B side conceded only two tries in 40 minutes of rugby, winning 15-0 in a 10s match against Valley, courtesy of scores from Oliver Kitching, Matthew Murlidar and Marco Lau, and 10-5 - tries from Ernest Prigent and Oscar Feltham-White - in a 15-a-side contest against HKFC. Both performances featured some stout defence from Sandy Bay, coupled with being clinical in taking their chances when they came about. This was especially true against HKFC, as we were pinned deep in our own half for much of the match, before bursting out for our two tries.

The B side have beaten every other club in Hong Kong this season except for Sai Kung Stingrays. That crunch clash comes up in the next set of fixtures in a month's time.

One of the features of the U13s' season so far has been the successful association with Macau Bats, who have come over regularly, making a big contribution to winning days like today.