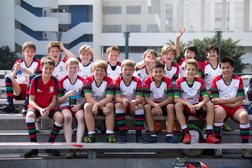 U13 Win against Sai Kung

Sandy Bay win with last kick of the match

Missing out on the Richard Hawks cup last year due to the protests and Covid, and with an extended delay on a return to competitive games everyone was nervous.

The entire U13 squad across both division 1 and 2 assembled at 11:30 at Kings Park to support each other on this existing day. Unfortunately our Div 2 side would not be playing a full league match today as their opponents had forfeited due to lack of numbers - they did however have a great friendly game against HKFC where they showed fantastic grit in their second half and did themselves and the team proud with a couple of impressive tries.

However for the Dic 1 side, having lost a number of players over the last year with many moving out from Hong Kong and a small number moving to other teams everyone was wondering just how competitive will we be?

The answer was very competitive.

Sai Kung and Sandy Bay played their hearts out. Neither team gave up in the ruck or the carry and the passion carried from the pitch to the supporters. The bay were first to score with Sai Kung battling back to bring it even as we went into half time. The second half went the way of the first with one try a piece both being converted - the race was on for who would get that last score before the clock ran out.

Sandy Bay threw everything they could into this, defending heroically on their try line from a Sai Kung onslaught and managed to clear their lines, winning an important turnover in the middle of the pitch. From there it was drive after drive as we slowly pushed up the pitch. A few penalties later and we had a kick at goal to take the match.

Up stepped Simon Rowe to take his 3rd (and hardest) kick at the posts. He lined up, stepped a few paces back and then kicked the ball high and true over the posts to score the 3 points to win the match as the Ref blew for full time.

Full credit to Sai Kung for a passionate and focused game that could have gone either way, but massive congratulations to Sandy Bay U13 on their first match and first win in the youth league.