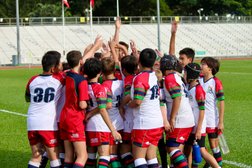 A feast of rugby on a hot, sunny afternoon at the Aberdeen Sports Ground

1st try was easy just 1 minute after kick off, Ryuto scored a try on the right side. Cooper finished with a nice conversion; it was only 4:12pm.

2nd try was at 4:13pm, Kian scored at the left side and Cooper scored another conversion, which was a beautiful one.

3rd try came from the side ball from FC2, Chiaki intersected with a nice turnover and scored on the right side. It was at 4:16pm. Cooper went for the conversion, but this time, it was just wide of the post.

4th try, Sandy Bay centre kicked off again, and won the ball back. Chiaki went all the way to the left sideline and scored again. Cooper's younger sister had a busy day today, placing the conversion stand, Cooper scored the conversion this time with no mistake. FC2 were still unable to make it to the score sheet. They made a good defence, but still not good enough to break our wall.

5th try was at 4:20pm. Sandy Bay made another turnover; Xavier scored his 1st try in between the posts. Cooper finished with no mistake straight through the middle.

At 4:26pm, we were having a small break, Sandy Bay sent on fresh legs with a host of substitutions.

6th try came at 4:28pm, Sandy Bay finally broke through the FC2 line and Kit scored his 1st try on the left side and ran to the centre for a try. Cooper finished the conversion with no mistake this time.

At 4:32pm, we played well from the right-hand side and all the way back to the left. FC2 defended well with a side ball on the left front, ball threw and intersected from Sandy Bay, Alex got the ball and turned around to the sideline. However, Alex might have missed the try with his slippy hand.
Excellent defence by Kit with a huge tackle stopped a good patch of attack by FC2 and surely stopped what was FC2’s closest chance to score.

7th try, Kit came again to intersect at the middle, Kadyn made a great pass to Kit. Kit ran from left to the middle and scored. Kadyn took the conversion with no mistake.

8th try, it was at 4:41pm, 2nd half started. Sandy Bay was still giving FC2 so much pressure. Kadyn ran from the left and score in the middle again. Kadyn made his own conversion, finishing with no mistake.

9th try, Sandy Bay knocked the ball in the middle, Xavier scored his 2nd try at 4:45pm Kadyn finished the conversion in the middle.

11th try, at 4:51pm, another round of substitutions from Sandy Bay, this time also almost a full team sub, with most of our big boys back, like Nico. Ryuto came back and scored in the middle. George took the conversion but hit the side bar, no worry it was good enough anyway.

12th try, Cooper intersected in the middle and ran all the way through and scored in the middle. Milo had his chance to do the conversion, and made no mistake straight between the posts.

14th try, Cooper intersected in the right side, he ran so fast and scored. Kian tried his first conversion from the right side but missed by a little bit.
Game finished at 5:06pm, Sandy Bay won with 14 tries and 11 conversions. The referee did not bother to count already, because we were way over 50 points.

Awesome win Sandy Bay! Fantastic team work across the board and wonderful to see our new players getting totally involved.
Next week FC1 – our boys will have a much tougher match on their hands.

Venue instruction:
Aberdeen Sports Ground (the grass pitch with athletic track. NOT AN ARTIFICIAL TARIFF WHERE WE NORMALLY TRAIN)