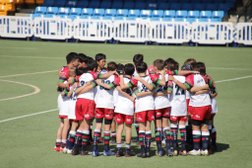 Sandy Bay suffered their second defeat in successive weeks against HKFC 1, but the positives outweighed the disappointment of losing

Lining up under a cloudless blue sky at Sports Road stadium, Sandy Bay were looking for revenge against Football Club following last week’s defeat. Missing a couple of players through illness and injury, the 15 players on the pitch and the small number of subs all did the team, coaches and parents proud.

HKFC were bigger and stronger and executed their game-plan perfectly. They gave up very few turnovers, won the line-outs and moved forward through the rucks with menace. We passed the ball better and had more speed on the wings, but unfortunately it wasn’t enough this week. The differences were the fine margins.

HKFC were 10-0 ahead at half-time thanks to two scrappy tries, which went unconverted. Sandy Bay were desperately unlucky not to get on the scoreboard just before half-time, but were held up inches from the line. If it had been 10-5 (or 10-7 with the reliable boot of Cooper), it could have been a different story.

As it happened, we went 17-0 down pretty much straight from the kick-off for the second half. Halfway through the second period, Football Club made it 22-0 before we got a well-deserved try. Xavier went over and Cooper’s kick between the posts was perfect.

We almost broke for a second try just before the final whistle, Alex racing up the touchline before being tackled 10 metres from the try line.

Overall, it was a fair result. We were beaten by a better team on the day, but they are not invincible. Team: take the coaches’ words on board: they were proud of your effort; you gave 100%; HKFC played really well; and we never gave up. The workrate was unbeliveable.

Win the final two games, and we will finish second in the league and probably avoid HKFC in the semi-finals of the cup. One game at a time, though (to deploy cliches I’m much more comfortable with). Let’s get back to winning ways next time!