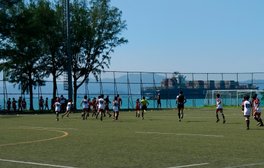 U13B v Valley Fort - a home win for our boys

A glorious afternoon for playing rugby, but the team was missing some key players due to colds and collisions. Hope everyone recovers soon!

This match would be described as a game of two halves, but obviously we'd never write such terrible cliches.
Sandy Bay dominated the first half, playing some great rugby and with Cooper controlling the play in the middle, deftly shifting sides, and keeping Valley on the defensive.

Kit scored first on the right, and Sandy Bay maintained the pressure, with a strong drive from Josh through the inside left, and then a try from Aryx. Cooper caught the Valley re-start and surged down the left before Sandy Bay switched to the right for Alex to score.

Valley were under pressure for much of the half, with strong runs from Luca keeping them on the back foot. Frustration showed with a late tackle on Cooper, and a yellow card for their 89. A great try from Cooper and his excellent conversions resulted in a 28-0 score at half-time.

The second half was very different. Valley recovered their composure and started to exert more pressure as our boys tired. Josh, Kadyn and Milo played very well, but Valley had more possession in the Sandy Bay half and pushed them right back to the try line on occasions.

Valley scored after a period of pressure, after a line-out right on the try-line. They broke through twice more before the final whistle. Final score 38-17. Well played boys!