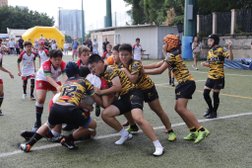 A hot and sunny day at King’s Park as the Sandy Bay U13B team took on the USRC Tigers in Round 5 of the league tournament. Sandy Bay were almost back to full strength again and feeling very confident against USRC Tigers.

Sandy Bay dominated the opening minutes of the match, pushing USRC Tigers deep into their half. Before long, Xavier streaked over for a try just left of the posts, which was deftly converted by Coops.

For a large portion of the remaining minutes of the half, Sandy Bay were on the back foot as USRC Tigers put on a strong display of tackling, quick recycling, and swift passing along the line. On several occasions they came close to score – and had one try disallowed after a scrum close to the try line. Sandy Bay held firm and defended hard.

Full credit to the Sandy Bay team. They held their nerve and showed a growing composure and maturity despite the barrage of attacking moves and occasional curious refereeing decisions. As the half drew to a close, Xavier broke through the USRC Tigers defences to score a replica try, converted by Coops to take the score to 14-0 at Half Time.

The talk at half time was all about digging deep and running out with more aggression. The boys listened and took action!

Xavier re-opened the scoreboard in the second half with a flying run between Tigers players going over to score his hat trick. Coops converted with a swift and accurate drop kick.

A much more impressive passage of team play followed. The forwards were given more opportunity to charge ahead ball in hand, driving the team onwards to release the backs closer to the try line. The team was rewarded as Kian charged over to score Sandy Bay’s fourth try of the match. The conversion was only slightly wide.

The boys had some large opponents to contend with – but not to be put off, notable tackles by Josh, Kit and Xavier, kept the Tigers at bay. The final try of the match was scored by, the man of the match, Xavier, right beneath the posts. It allowed an easy drop kick conversion for Coops to end the match 33-0 to the visitors. The final whistle blew.

Next week, a re-match against FC2. While Sandy Bay U13B have started their 2021/22 league campaign strongly with three wins out of three, if the boys learnt one thing from the match this week, then they must run out next avoiding the pitfalls of underestimating their opponents.