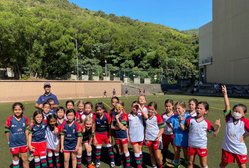 Following from last week's friendlies that were located in a northeastern nook on Lantau Island, inaccessible even by private car, this past weekend the Sandy Bay U9/U10 girls were delighted to be in much more familiar surroundings: Stanley Ho Sports Ground on Sha Wan Drive.

The bright and early visitors this week were HKFC, and the Sandy Bay girls, on their home turf, were excitedly looking forward to hosting their vaunted opponents. The morning began with joint warm up exercises led by coaches of both clubs, where the girls were introduced to rucking drills and physical contact in preparation for the games ahead.

With the Sandy Bay teams divided largely as they were the preceding week, the games kicked off: Sandy Bay "Blues" playing a strong HKFC side for their first game in the searing Sunday sun, and Sandy Bay "Whites" playing a slight weaker HKFC side, in a bit of shade closer to the sidelines. Whereas SB Blues lost their first game 6-0, SB Whites comfortably won -- by the same margin. The second games saw the opponents swapped and this time SB "Blues" were comfortable winners by a margin of two tries, whereas SB "Whites" drew.

The final game saw two 10-a-side competitive games wherein the rules were such that the first team to score two tries won. The older (U10) girls won by two tries to one in a nail-biter. There was a stellar performance put in by Olivia once again, who hadn't missed a beat following from her barnstorming display in Discovery Bay the week before, as well as Sophia who scored a hatful of tries. The younger (U9) girls enjoyed their game played with in a collegial atmosphere.

Scoreline, winners and losers aside, the over-riding emphasis of the morning was building camaraderie between the two clubs, playing in a competitive but sportsman-like spirit, and enjoying some fun rugby. All would agree that these objectives were nicely met.