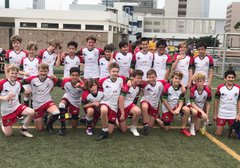 Man of the Mach performance and Hatrick from Omar Secures a 21-14 Win.

The Sandy Bay U14 Boys (U14B) kicked off their Youth Season on home turf on Sunday afternoon. Fortunately, the early afternoon weather was overcast at Stanley Ho Sports Center. Not so fortunately, as the match wore on, temperatures increased concurrent with the decrease in overhead cloud cover.

Atmospheric conditions aside, for their first competitive game, U14B were pitted against possibly the weakest team in their 5-team league: USRC Tigers Team 2 (USRC 2). That said, there was a good mix of first team players even in the USRC’s second team.

The return to a new season of rugby saw the usual swathe of departures from the group, a few welcome additions, not to mention changes—in some cases vast—in continuing players' physical shape and size (Aodhan, James, etc.). All of this meant a certain degree of experimentation in terms of the team's lineup and players’ positions. As some players took to the field in different, new positions, it was understandable that they took some time to acquaint themselves with the unique demands of their new roles.

Although the game was tense going into the final period of the match, the U14B secured the win they were seeking. They did, however, leave it late—until the last two minutes of the match. Omar—back playing in his correct age group—put in a man-of-the-match performance to score his third try (a hat-trick), and his second from the back of the scrum. Simon's kicking was similarly immaculate as he slotted his third conversion for a 100% success rate. Merely seconds after the resumption of play, the referee blew the final whistle to rapturous cheers from the players, as well as supporters on the sidelines.

Although the win was welcomed (as is any win), and the score line was relatively convincing at 21-14 in favor of U14B, in some ways the score did not reflect U14B's superiority: Huggy had a try disallowed even though it had looked as if he had scored legitimately dead under the posts, and individually the Sandy Bay boys were considerably bigger and stronger than their opponents.

All in all, the win was as educational for the coaching and management team, as it was enjoyable for the boys. Mid-week training promises to be focused as the boys prepare to take on USRC 1 for their second hit out on Sunday.