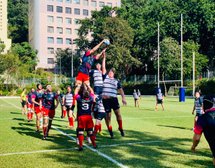 Who would have thought, the under card for the HKU Sandy Bay U11 Boys v Tigers would be as exciting as this?

Only one point on the ladder separated the HKU Sandy Bay Raiders and HKFC Bulls heading into this match with cementing second place and keeping in range of competition leaders Valley up for grabs.

Both teams showed intent to play and desire to attack through the midfield with potent runners on both sides.

Handling and the continuing curse of not being able to find touch off penalties was detrimental to the Raiders early chances but even so they were showing plenty of threat.

James Tuttiet had the best chance of the Raiders early exchanges, a hard unders line saw him with an open line and what would have been a score under the black dot went begging as the pass was spilled.

Tony Scott and Luke Hayes engineered an overlap with a simple run in on offer but also failed to find the man. Still the signs were indicating that if the passes started to stick the Raiders would score tries.

Tutt and Jonny Templeman were hammering the Bulls, tackling up a storm in midfield. While Cormac Ahern and Scotty led the kick chase and were cutting down the Bulls wide men.

Eventually the Bulls 10 found the space, the Raiders forwards leaving the blindside under attended and the men from Club breaking down the short side and taking maximum points.

Raiders were slow to learn their lesson with another blind side break being key in the lead up to another converted score with the Bulls out to a 14-0 lead.

Still the lineout was working well, the two Will’s, Spence and Kruis dominating on both Raiders and Bulls throws and the men from Sandy Bay began to build their chances.

Try scoring wunderprop Jeff Chin was the first to find his way over the chalk, twisting and diving through the tackle to dot down, Owen Pescod nailing the conversion to close the gap to 14-7.

Still it was the Bulls next over the line, kicking out to 21-7.

The Raiders were finding space though, Carl Chambers taking the gap and only his injured calf stopping him accelerating and scoring from fifty out… either that or tiredness from the 8km run he’d done that morning, perhaps some combination of the two.

Spence was the next in a hole, only to pass to the inside support when the outside men posed the greater threat.

There were encouraging signs that the wide attack was starting to click and just before half time it was Kruis steaming onto the wide ball and taking it under the posts. Tom Mckenzie slotting the conversion and taking us to the break at 21-14.

After the break the Bulls were next to score taking the lead out to 28-14 after the conversion and sustained pressure saw them looking like scoring again only for Matt O’Shaughnessy to time and time again cut them off in cover defence.

The Raiders finally got their hands on the ball and Owen Pescod broke down the left touch line from deep in his 22, he broke the line and beat the cover before breaking back in field and hitting half way, he’d drawn the last line of defence and Pete Budd was screaming for the ball having raced from the right wing to get there.

Pete’s eyes lit up thinking he was getting the ball with a 50m run in to impress his mother, who was watching on the sideline, only for Owen to throw the dummy. Unfortunately the Bulls fullback didn’t buy it and the play broke down.

The Raiders received a penalty just shy of halfway and Mckenzie confidently stepped up to the mark. Unfortunately he’d been over ambitious and the Raiders unbroken run of 15 successful shots at goal was broken.

Both teams hammered into each other and finally Owen broke free again to continue his fine run of try scoring form, converting his own try had the Raiders right back in the fight at 28-21.

Bulls were not to be denied, they drove play back into the Raiders half, earned the penalty and took the match back to 31-21 with five left to play.

Unfortunately for the Raiders that last five was to be all Bulls, the big HKFC pack were counter rucking with gusto and controlled possession strongly. Bulls added another try and conversion taking the lead out to 38-21. The final play of the game saw their midfielder breaking free from the halfway only to be called back for a forward pass.

The Bulls really stamped their class in that final stanza but the Raiders will learn a lot from this game. The men from Sandy Bay were in the race through 90% of the match and there will be some very sore bodies on both sides after some truly brutal hits in defence.

This will be the only meeting of the two sides during the league and Raiders being much more aware of how they’ll need to step up next time will hope to meet the Bulls again in either the semi or grand final.

If you need strapping be there for midday