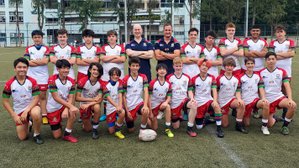 While the covid-related travel limitations have left some Hong Kong residents unhappy, one evident benefit has been the loosening of the majority of covid-related restrictions locally. This has led to a return to normalcy for much of daily life, which in turn has translated into a resumption of the Hong Kong Rugby Football Union (HKRFU) Youth League. Last season's halting start to the league, as well as its stop-start nature has been consigned to the dustbin of recent memory.

For their first game, "away" to Sai Kung Stingrays (SKS), the U16 Boys (U16B) took to Tin Shui Wai. The venue itself elicits special memories partly because of its location: it is closer to Shenzhen, than to Stanley Ho Sports Center, and partly because reaching the venue feels as close to a "tour" game as it can get.

Despite playing the same opponents in a pre-season friendly a couple of weeks ago, there was a certain degree of uncertainty in terms of how the new-look Sandy bay U16 boys would fare in their first competitive hit-out: New combination of boys including those born in 2006 combined with those born in 2007 (with the latter group taking the wooden spoon in their league last season), new set-piece calls, and new (first-time) pro-coach in Dean Rossouw.

The game took place according to the recently instituted HKRFU Youth League rules, the most notable of which were the division of the game into quarters, and the authorization of substitutions only during the games’ three intervals.

The U16B started with almost their full complement of players, and immediately from kick off, it was abundantly clear that the game was going to be a herculean clash between two strong and committed sides. Individually, the Sai Kung Stingrays boys were big, agile and quick—much bigger in fact than the team they fielded in their friendly. What slight disadvantage Sandy Bay U16B suffered in terms of size, however, they made up for in terms of team formation/cohesion, game management, and set-piece superiority.

The contest was bruising and relatively fast-paced. Ultimately, it was Sandy Bay U16B who drew first blood as they ran in a hard worked try on the left side. The acute angle, however, made the conversion too difficult. Sandy Bay's five-point lead was as slender as it was fragile. SKS kept probing and trying to break through the defensive line by repeatedly relying on their bigger boys to find gaps. Sandy Bay U16 boys, however, stood fast, and they dominated territory, even if their possession stats were not as superior. Just before half time, strong forward play saw Sandy Bay win a 50-50 ruck from which their backs collected the ball and scored close to the posts. The conversion was good.

Despite the 12-point half time lead, the first half of the contest was taxing—in equal measure—on both teams, and it remained to be seen if either team's stamina would cave. As it turned out, the intense tussle continued throughout the second half and indeed SKS scored early in that period (unconverted) to narrow the points gap to seven.

Thereafter, the remainder of the game continued in largely the same way as the first half, with both sets of players tiring (naturally) as the game wore on. By the time there were five minutes remaining on the clock, with no additional scoring from either team, Sandy Bay U16B resorted to "time management" to see the game out (and to conserve their almost depleted reserves of energy). Final score: 12-5 in favour of Sandy Bay U16B.

Ultimately, these were first hard-earned points on the board for the U16B and mid-week they will be focusing carefully on those areas where there is room for improvement. Kudos to all the players as well as the coaching team.