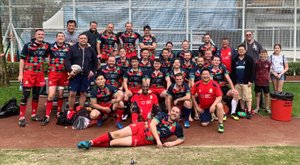 Sandy Bay Marauders continued their recent form of wins with another against Kowloon. The game was expected to be a much more physical encounter with the two biggest packs in the league facing off. This is exactly what we got, although it was Sandy Bay who won the battle convincingly.

Early in the game, Sandy Bay managed two tries, both converted by Ross Eathorne. The first was scored by Peter Fan, who took off down the blind side and finished under the posts. Doug ‘Sideshow’ Wolfson getting the second try with a stretch across the line from the base of a ruck.

The second try appeared to be the wakeup call for Kowloon, or perhaps it took the old geezers that long to finally get warmed up! For the remaining 15 or so minutes of the first half Kowloon camped in Sandy Bay’s 22. Their pack tucked the ball up their jersey and tried everything to force their way over the line. The Marauders pack stepped up and held their ground however, and with every man putting in serious shifts they ensured Kowloon did not cross our line. A truly inspiring performance!

The thinking at half time was if Sandy Bay scored first the Kowloon spirits would be too crushed to recover. Soon into the second half, promising new recruit Denis made a break down the wing, brushing off a few tackles and offloading the ball to gift Billy Brant a try. Billy managed to get a second try which resulted from a cross field kick by Ross, who didn’t miss a conversation all day and earned Man of the match award for his efforts.

Kowloon did manage to finally get in the score board with an unconverted try, not enough to get back in the game however. This was soon answered with another converted try under the posts, scored by Rhys Pinna-Griffith.

The final whistle blew after Kowloon scored another consolation try, but that didn’t take away from our joys after a hard fought 35 to 12 victory. We were delighted to hear that Raiders had also won their game, and both teams combined their efforts in the celebrations.

This joint effort would be costly to some, in what was a long night! Many would head onto McSorleys to watch the 6 nations and see how the pros do it. Personally, I had played and watched enough rugby for one day, and took it as an opportunity for a well-deserved sleep ;)