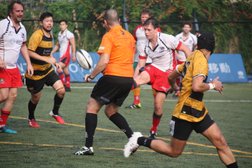 Coming in to the first game of the new season against Tigers, the mercurial new coaching set up – Steve Tindall and Andy Stidworthy – led a much changed but very familiar Marauders XV into battle on an electrified Saturday afternoon at King’s Park.

The Usual Suspects were all present Club Hero - Willy Chen, Club Nuisance – Nubious, retired Captain Sir Dougy Wolfson and after serving out the shortest retirement known to rugby, general JJ Bull was back from his newfound stardom in Japan to take his place on the bench with strict orders to coach Stids – “I only play 10”. A strong looking forward pack with a combined 740 caps on the bench, a much changed youthful backline punctuated with Saffas everywhere. The Marauders were fired up.

The game kicked off with Marauders receiving, classic way to start the season halfback Lawrence Rumble knocks on a straight foward kick off and immediately the Marauders are on the back foot. Not to worry, the Marauders built their Grand Slam charge around their defence and they continued in this vein, quickly forcing a knock-on.

As the heavens opened with lightning over the Kowloon mountain range, the game became about defence and positioning, ably led by new standout flyhalf Nick “Lut” Cameron as he drove the Tigers back time and again, leading a rush defence ably supported by centres Conor “the Red o’Driscoll” Slattery and debutant Kyle “Smethers” Smetherham. The most impressive part of the back lines performance was the consistency in organisation and communication especially on the part of new Bay maestro Jay Chau in his first competitive rugby match.

The Marauders pack with a combined age of 500 years and one gold chain from their diamond dealer Harrison “Gladiator” Standish had completely taken the ascendancy, personified by driving the Tigers scrum back 5 meters to somehow allow standout Lut Cameron to intercept the scrum half’s pass and score under the sticks. 14-0 to the good guys at the half.

The second half started and on comes JJ Bull at 15 (Stevie T is the boss), this time it is captain Gav Hermann who knocks on and the Marauders set about demolishing them at scrum time again. At 14 nil up the game was ebbing and flowing between knock-ons and kicks into touch, a few huge hits from the team’s model Peter Fan, a few more dominant scrums from returning bash brothers Mike “the Judge” Coatsey and Matty Whitmell and the play of the season kicked off.

Our Chilean monster Arturo broke three tackles on half way, shrugged off 2 more defenders and offloaded to the retiree JJ Bull who then sent the cameraman and the cross cover defender for a hotdog off his right, draws the next defender and offloads to someone strikingly similar looking to Club Captain - Chief “I don’t open my eyes after sunset” Lau - who goose steps, shows, goes and offloads a one handed Tom Brady pass back into the path of the fly JJ Bull. Try under the poles. Game over. 21-0.

Huge effort on defence, glimpses of real class on attack and the Marauders walk away with the 4 points. 10 wins on the bounce. Next up Disciplined Services.