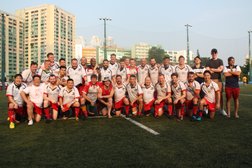 Coyote Match Report: Marauders leave Sports Road with 5 points, 5 tries and high 5s all round after demolition job on the Expendables

oyote Match Report: Marauders leave Sports Road with 5 points, 5 tries and high 5s all round after demolition job on the Expendables

Coyote Match Report: Marauders leave Sports Road with 5 points, 5 tries and high 5s all round after demolition job on the Expendables

Before the match the coaching team received a welcome boost as assistant, assistant coach turned burger flipper – Dan “Punchy” Purcell – finally turned up. After introducing himself to the 18 man strong Marauders bench, Punchy, Stids and Stevie T set out the stalls. “Lads, let’s do the simple things right, we play safe rugby”. And that’s exactly what we didn’t.

Off kick off the Expendables set out to play one off runners around the fringes. We were in for trench warfare. Tackle after tackle, infringement after infringement and the Expendables were making metres. A few silly penalties and we were forced into competing at the set piece. The Marauders scrum, so steady all season, creaked first up, but this was all to change. Man of the match and all round nuisance, Chief “Eyes wide shut” Lau was making hit after hit which led to a loose turnover.

First time for the Marc “The Conductor” Stone and Nick “Don’t let me kick again” Cameron to unleash the hungry backs. A few phases of the Marauders dragging their opposition from left to right and we were firmly camped in their half. A few burgers were flipped, the second scrum of the game 10m out led to Afrikaaner rugby, a poorly timed switch, head down crash ball and a try to returning centre Lawrence “Cross Kick For Days” Rumble. Converted. 7-0.

The next 10 minutes were more trench warfare, a few more burgers, a few more hits to the Judge Coatsey. A few more penalties given by our menacing Alisadair “My Ball” Jessup and Peter “No-Buddy can catch me” and the ref wanted a word. True to form, the Marauders listened. Stole the ball back and sent it wide to the Flying Roo Pete Budd who beat three men for pace only to jog it over the line and put the ball down immediately with no pressure on him. Loves to test his kicker. 12-0.

The next five minutes summed up the heart and desire of the entire Marauders set up. Camped on our line we stood firm, holding the Expendables up and then forcing a knock-on. With some great hits by Isaac “Dewey” Lau, David Raper and the twin towers of Connor Clark and Will Binnie.

At the start of the second half the front row reshuffled as the second set of 26 reserves came running on. This was to be more of the same, except we had now decided we were the Barbarians. Off load after off load, half breaks galore, some gallant scramble defence wasn’t to stop the big number 8 “Ali Jessup” making up for his 23 penalties conceded as he ran one in from 15 metres out. The Marauders just came again and again. Conversion missed. 17-0.

More champagne was sprayed, more tackles made and livewire halfback Marc Stone decided no need to waste time with passing, throws the dummy to their entire team, sends most of his own team for hotdogs and canters in under the poles from 40m out. 24-0. Not to be outdone by his halfback partner, Nick Camo decided he too could score from 40m out, didn’t throw the dummy, just ran straight at his defender, bumped him 5m and off he went for his try under the poles with the last play of the game. Conversion missed. 29-0.

A few monstrous performances on the day, none more so than the giant Will Binnie, the stalwart Willie Cheng, and the flyer Peter Budd, but the MOTM performance was reserved for Club Captain Chief Lau who led the tackle count with 32 for the day, 180m carried, 5 turnovers and all-round great composure with ball and beer in hand.

DOTD was hotly contested but the award was handed out to Justin Yuen for his cynical yellow.