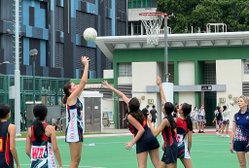 Snatching victory from the jaws of defeat

The match over the weekend can be described in one sentence: “Snatching victory from the jaws of defeat.”

The Rockets gave up a comfortable lead to go into half time in the deficit. The Cranes were probably the toughest team we faced this season. They really tested our girls as they prevented us from scoring for an entire quarter. This wasn’t helped by the fact a few missing some players. But our girls kept calm and slowly fought their way back into the game to record our third victory of the season.

The girls demonstrated resilience and learned a lot from the umpires’ calls. All in all, it was a constructive and enjoyable day.

Don't Forget:
No jewelry
Hair tied back and off face
Nails short (can not be seen above top of finger)
Water Bottles