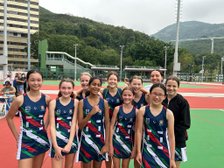 A strong win for the Galaxies

The team arrived (some from the Sevens!) to warm up and prepare for their last league game of 2022. The cooler climes were welcomed as we only had one guest sub from the U12s - thanks Liv.

Coached by Jessica and captained by Tilly, the girls played so well as a team - running into space, calling for the ball, defending well and taking every chance to score. By the end of the first half, our score was in the double digits! The momentum continued into the second half, with only one goal conceded in the final quarter.

Don't Forget:
No jewelry
Hair tied back and off the face
Nails cut short (must not be seen over top of fingers)
Water Bottles